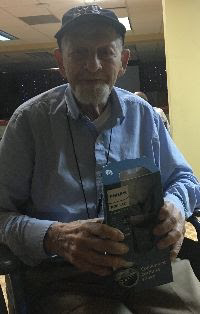 David Jaffe was born in Manhattan, NY in 1925. His father was from Jerusalem and his mother was born in NY. He had a brother that passed away who was a Rabbi in Hollywood, FL. David’s father was a furrier. David attended the University of NY and graduated with a degree in advertising. During World War II, David was stationed in the Pacific and received three battle stars and a bronze medal. He was married after the war and had two daughters and five grandchildren. The family lived in Long Island, and David worked in advertising. In 1996, he and his wife moved to Florida. In 2018, there was a write-up about David in “Who’s Who in America”. David recently joined The Peninsula Assisted Living facility and came to my first class after the Covid lock down. The first thing he asked me when we talked was if I can bring him a Siddur. After visiting him and talking, I asked him if I can buy him an electric shaver. He readily agreed and threw out his razor. He is now a proud owner of a brand-new electric shaver! His next request was obvious: would I be able to get him a Rosh Hashana Machzor.