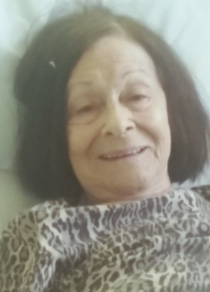 Remember Pearl Matalon? We featured her biography in May of 2016. At that time, she was in a nursing home in Aventura, Florida and was an attendee at the Wednesday TOP class that was given in that facility. Boruch Hashem, Pearl transferred to an assisted living facility and is now a regular attendee in the Monday TOP class given there. Instead of being brought to the class in her bed, she is able to come to class on her own! Here is a short paragraph we wrote about her life back in 2016.
Pearl was born in Cuba in 1936, and left with her family to Brooklyn in 1943. In Brooklyn, she attended elementary public school and Hebrew school. Later, she went to Thomas Jefferson High School. She met her husband, who was also a native of Cuba and of Sephardic descent – originally from Turkey. They were married in 1956. Pearl’s husband owned a ladies clothing factory and they had 2 children: 1 boy and 1 girl. Pearl and her husband moved from Brooklyn to Long Island and eventually to Florida in 1990. Pearl’s son has 2 children of his own and lives in Florida. He moved closer to his mom so he could take care of her after she entered the facility in North Miami Beach. I enjoy visiting with Pearl on Fridays when I get to bring her candles for Shabbos and when she attends my Wednesday class.
And now she is in the ALF and is a big part of our class!